skip to main | skip to sidebar

A YEAR OF KAMAR SENI 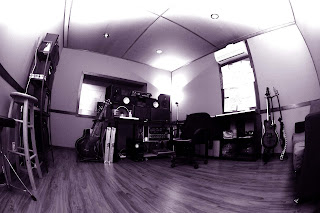 1. Describe who you are and what you do in your own words.

I am Hezry Hafidz, also known as AG COCO on stage. I am a music director and the manager of Kamar Seni recording studio. I am currently working with several local bands and solo artistes as a producer. Other than that, I am with Hujan band as a lead-guitarist.

2. How often are you in your studio and what do you usually get up to?

My studio is where I live, my cribs! So I would be in the studio most of the time. I work from 18 to 20 hours a day. Usually I would be doing music arrangements and recordings.

3. Describe a typical day for AG .

When I’m not attending or performing any event, a typical day for me would be hardly working in the studio. I only eat and sleep when necessary. Sometimes I didn’t open my studio’s entrance..and sometimes it also would be my room’s door. How pathetic is that?

I am currently working with several solo artistes as a producer. Namely, Aiman Sidek, who won second place in Akademi Nasyid on Channel 9, the Best Actress award winner in Malaysian’s Film Festival 2009 & Anugerah Skrin, Liyana Jasmay, a new comer Ainul Aisyah, a new young talented designer, and video director, Isma Yusoof, and many more that shows I am really busy now! LOL! . In the meantime, I’m touring with Hujan for Mencari Konklusi Tour, we did successful shows in and Peninsular Malaysia, and we will be going to Sabah, Sarawak and soon.

5. What are your feelings with being involved in Converse?

I feel lucky and proud because I’ve been wearing Converse's shoes and clothing since I was in school and until now Converse has been my favorite clothing line whether for casual or when I'm performing. I am also feeling honor to be trusted and to cooperate with Converse.

6. The tagline for Converse's current campaign is "You're it/You're on/You're up". So tell us what inspires you to be the best at what you do?

One thing that inspires me to be the best at what I do is probably knows the consequences, the good and the bad things. Then a goal, and set myself target and I'll make myself a promise like if I done all my works, my songs then I will get improve my skills of songwriting, music arrangements and compositions. That will lead to my over-all success.

But, there is also the other side, of not finishing the job. I'm sure there are lots of things that wouldn't come as such a positive result. Another thing that inspires me to do work is seeing other people's success. After all, they're just normal people like myself, and look at what they were able to accomplish because of their determination and ability not to give up, they were able to accomplish their success. Even though they probably felt like it plenty of times. You'll be glad once it's finished. A weight will be lifted off your shoulders. I hope this in itself was an inspiration. I don't know any musician who got to the top without hard work. Take whoever you want. They all work bloody hard, harder than you think.