skip to main | skip to sidebar

she had been through all susah senang together since years. I love you Sifoo..
Posted by Hezry Hafidz at 4:13 PM 7 comments: 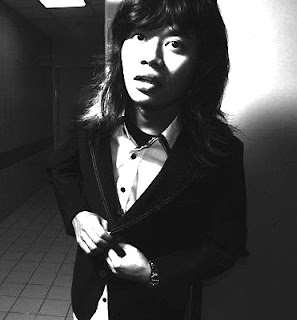 Fans screaming your name. Some even go beyond extend of chasing you down the alley, just to take pictures with you or have you signing on their tshirts. Others might cry or shriek just by catching a glimpse of you passing by the stage. These are the ideas we usually get from movies or music videos, on what being a rock star is all about. To some, the showbiz is nothing but sweet fantasy that promises wealth and fame. To Hezry Hafidz or better known as AG Coco who is now a guitarist of one of the very successful bands in Malaysia that is HUJAN, entertainment industry is more than that.

Born Mohd Hezry Hafidz or AG, 28, he originated from Alor Star, Kedah. A Diploma holder in Music from Akademi Seni Kebangsaan (now known as ASWARA or Akademi Seni Budaya dan Warisan), according to AG it is his passion and interest that brought him to establish a career in the showbiz. When asked as to why he chose to be apart of the music industry, his answer was very simple and straightforward; he believed that he is able to contribute something significant to the current local scene. A man with vision, AG proved that he is the real deal by stating that his aim is to share his ideas and masterpieces with the society and bring them to the international level.

Why music and how exactly did he start getting involved in it? When asked these questions, a faint smile relaxed the drawn lines of his mouth. “When I was in Form Three, I studied in an Arabic-system-oriented-school that is Maahad Mahmud. Back then, the environment was that, there was nothing to encourage the students being actively involved in anything that is musically-related,” he answered. But then, it did not stop him from venturing the field that will one day change his life. He added, “ I was the sort of person who prefer to do things differently than the usual norms, so I created this interest to start picking up a guitar and learn the beauty of it by myself.” Little did he knew, that was probably one of the best decisions he had made in life.

Starting from that point onwards, he stepped further in developing the musician in him by forming bands and trying all different sorts of musical instruments, like the bass and drums. Initially planning to be a bassist, he then changed to guitar when he enrolled in ASK because according to him, “ The fact that the bass that only has four to five strings does not satisfy me. I wanted more back then!”
Getting the chance to really sit and talked to him, had let one see that music industry is not just a bed of roses; it is indeed full of trials and turbulences. AG further stated that for him to be where he is now, he had to go through a lot of ups and downs. “My band was once booed by the crowd at gigs,” said AG. There were even times when he had nowhere to go due to not having enough money to pay the rent and make ends meet. He then elaborated that during that phase of his music career, as an upcoming band who was trying to find a place in the local music scene, he had to perform at shows where sometimes there were no payments at all. But he then added, those were actually the things that have made him a stronger person to face all the hardships in life.

It is inspiring to see how his patience in handling those hard experiences finally paid off. At the mere age of 27, he can say that his achievements after working hard to prove himself in the industry, are something to be really proud of. Working not only as the guitarist of HUJAN, he also owns a studio he named Kamar Seni in Bandar Sri Permaisuri, Cheras. There, he acts as the music director to nearly 100 local and outside artists such as Azlan and The Typewriter, Aizat Amdan, Ajai, Tomok, M. Nasir, Jamal Abdillah, Yuna, Awi Rafael of Singapore artist, and many more, for various television programs and live concerts. He also briefly explained his job as music arranger, producer, composer and sessionist, proving his versatility as a musician in general.
Among his accredited works are the projects P Ramlee – Satu Indiepretasi 2010 ( a project that involved local artists covering the songs of the late Tan Sri P Ramlee) and also My Music Astro 2011 (a project in honour of Malaysia's 54th Merdeka Day). He presided both major music projects that had turned out to be successful and well-received. Apart from that, he is currently working on the upcoming singer-songwriter Diandra Arjunaidi's debut album and Yuna's second album.
So, what are the achievements that he is really proud of through out his career in the showbiz? AG answered this with poised dignified expression on his face, “The achievements that I am really proud of would definitely be the band winning Best Rock Song and Best Rock Album awards at the Anugerah Industri Music 16 (AIM ). Apart from that would be, me getting nominated as the Best Music Arranger and Best Young Composer for the Music Author's Copyright Protection or MACP Award in 2010 and 2011. I was also recently nominated for the Best Sound Engineer and Best Music Arrangement at the 18th AIM”. For someone who can be considered as a newcomer in the industry, his achievements are almost at the same level of those who have been industry for quite some time.

As to what are the examples of his fondest memories of being a musician, he stated that having the opportunity to travel to different countries like Dublin, United Kingdom, France, Australia, Brunei, Indonesia and Singapore, and performed there. He described these experiences as priceless because not only did he manage to travel outside of the country, but he also managed to let the people from different regions, get a taste of the local music. This according to him, is far more satisfying than anything else in the world.

Throughout the whole interview, one question that caught his attention was when asked about the society 'stigma' on musicians as being incapable to make a living if compared to other professional jobs in the real world. Does this 'stigma' still exists? After pondering for a few moment, he answered with absolute calmness and confidence, “I personally think such 'stigma' no longer exists. Many have viewed the job prospects as a musician no longer restricted to certain aspects only.” He then elaborated, “Being a musician is also perceived as having a professional job nowadays. Not everyone has the ability to excel in this field. Sometimes, even with the talent that has been bestowed upon you, the chances of you to make it big in the showbiz all depends on hard work and perseverance.” He then highlighted that having a career in the entertainment business is just like any other jobs, it requires good work ethics and excellent networking with people from different backgrounds.
According to AG, the current music scene is going through a revolution that is rewarding to many. With the emergence of many new talents, he took it as a positive sign that the industry is changing for the better. “It is good to know that there are many upcoming young and talented acts. This is actually a catalyst for healthy competition among the local artists. But one must bear in mind, the local music industry is not that big, thus quality comes first before quantities,” he explained. He foresee the industry as being able to compete with other renowned international acts only if everyone is willing to strive harder and not depending on others too much. He believed that there will be more productive works that are extravagant in nature if the people from the industry are more united and supportive of one another.

A good role model to all the wannabe musicians out there, his words to those who are keen to make it big in the music industry is definitely something to keep in mind. He advised, “To succeed in this field, you must have patience and be mentally prepared to face the reality that can sometime be a blow in your face. It is a dog-eat-dog world out there, and there is no such thing as short cuts in producing something that appeals to the large masses.” Then, he explained further that in order to produce something that can be widely accepted by many, one must always analyse listeners' tastes and demands.
Other than that, he added that it is essential to not easily give up in order to survive in show biz. One must always keep an open mind and be ready to get rejected. This is because rejections are good in sense that they will drive a person to strive even harder. A person who wants to establish himself in the industry must also constantly work really hard. Like what he said, “I live by these words, 'Get to the top with hard work! Work bloody hard, harder than you think.' And I do believe that those who want to be in the showbiz, must apply this in their life too.” One last piece of advise from him would be, always do it for passion and not money. “It is the passion that will bring out the sincerity in you when you produce a masterpiece,” he said with a smile.
As to where and how would he sees himself in the future probably ten years from now, he laughed cheekily and answered, “Maybe settled down with a kid and just watch my child play the piano for me.” He then continued, “Though that idea seems appealing to me, the truth is, I wish to expand the studio. Have a bigger and better-equipped studio or have even bigger business ventures in the future. I hope, I am able to produce songs and work with international acts besides touring outside the country with my band.”. Well said, AG. With that, team Exquiseed would like to wish him all the best in life and may he is able to achieve his ultimate goals and dreams!

- an artical from UPM Straits Times.
written by Amirah Asraf.